Good, you’re here. Please say hello to our current featured veggie: kale. Don't like it—or perhaps merely assume that you won't? Just forget all that and give kale a shot, because this veggie may surprise you.

An ideal winter crop, kale varies in height from 12 inches to 3 feet, depending upon the type. In fact, "Walking Stick Cabbage," a novelty variety, sometimes reaches 7 feet. You can dry the stalk and use it as a cane! I mean, who knew?

Whatever its height, though, kale is packed with nutritional goodies, surpassing all but the sweet potato for Vitamin A and beating most veggies for protein. Only potatoes and broccoli (of the better-known vegetables) score higher. Plus, kale has no sugar—none, which makes it a great foil for beets, say, if you’re diabetic.

It’s also a fine source of calcium and iron. And let’s not overlook its vitamin C content, which at 80 mg. per cup (chopped) is impressive, nor its vitamin k and folate. This veggie, folks, is a nutritional treasure. And, as you might guess from its appearance, kale is a great source of fiber. It even contains lutein and zeaxanthin, antioxidants that protect the eyes. 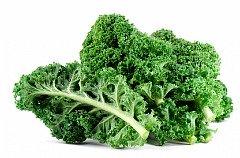 Yet kale doesn’t appeal to everybody. For one thing, it looks like it would be tough to eat—although nothing could be further from the truth. Just a little processing can turn that bristly looking stuff into food for the gods.

Don’t believe me? Then check out these recipes… Or try Jo Stepaniak’s “green martian sauce” over a baked potato: awesome! Easy, too. You can find it in her Vegan Vittles cookbook—see link at the foot of this page. In the meantime here's a quick-and-dirty version:

So good, and so simple as well. Incidently, Jo Stepaniak has other great recipes, which even hard-core carnivores might like. Meanwhile, here’s to you and your quest for another great veggie. Given a sporting chance, kale can be a great ally and fellow traveler; maybe give it a shot one of these days?

Vegan Vittles: Down-Home Cooking for Everyone